The Triglav Lodge at Kredarica (2,515 m) is the highest mountain hut in Slovenia and the highest meteorological station in the country. It stands on a small plateau just under the peak of Kredarica, an elevation in the ridge between Mt. Rjavina and Mt. Triglav. The addon introduces the whole Kredarica complex, landable heliports, animated windmills, people and clutter along with some roped partys in the nearby walls along with Aljaz’s tower and hikers on top of Mt. Triglav. It offers different visuals in winter, summer and night.

Kredarica hut complex along with Mt. Triglav and Aljaz’s tower on top of it achieved almost a mythological place in Slovenian culture and mind-set. It is inseparably woven into the national essence and national pride, representing and summing up the country, its history and its epic path towards independence. As a symbol it has not lost the appeal among younger generations who still look up to it in awe and religiously climb to the top, be it summer or winter.

The addon is a spin-off achievement of an elective course Space and media taught in 2018 at the Faculty of Architecture, University of Ljubljana, where the students, studied the notion of identity in digital environments in a combination with the development of their digital design skills. Kredarica was chosen as a case study, because it offers numerous objects and buildings while being manageable in scope and also well documented. Students have learned efficient modelling techniques, texture design and texture mapping, while at the same time looking for recognisability and essence of the spatial character the complex conveys in real and now also, in digital environment.

While the modelling and texture design were essential in the process of add-on making, there were many other things that again served as testing ground for our future projects. For the first time we looked into the seasonality of objects (beyond the greenery that has been done before), conditional visibility, object and character animation.

Among the key features you will find:

Important note 2: use the appropriate installer depending on weather you are installing for Slovenia X (v1.0) or Slovenia X Photoreal (v1.1)

Slovenia X for FSX and P3D 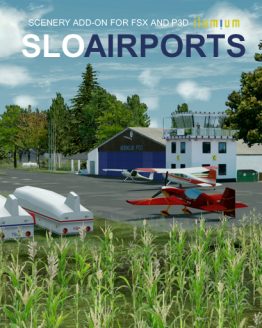 0,00€
By continuing to browse the site you are agreeing to our use of cookies.